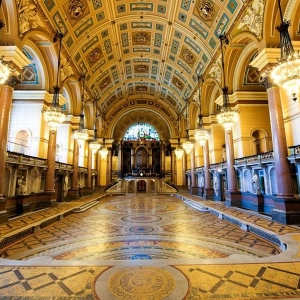 This unique neo-classical building is the centre of Liverpool’s traditional cultural forum whose foundation stone was laid in 1838.

It was built as a result of separate competitions to create a fitting space for the aspirational city to hold its music festivals and other assemblies and contains the vastly ornate Great Hall with its vaulted ceiling, Minton tiled floor, replete with maritime and civic symbolism and is also home to a massive pipe organ.

The Small Concert Room at the Northern elevation of the Hall has been described as the 'Albert Hall in miniature' and is circular in design with a proscenium arch stage and is flanked by caryatids, female sculptural figures which are designed to give the impression of supporting the fine lace work of the iron balconies.

Unusually, the Hall also houses the Crown and Civil Court which were working courts until the 1980s when the Court Service moved to new premises in Derby Square.  The ground floor and basement levels also house holding cells for prisoners and the condemned cell.

St George’s Hall can lay claim to one of the oldest ventilation and air conditioning systems in the world, the workings of which can be seen in the lower basement level and throughout the Hall.

During the Seventeenth and Eighteenth centuries, Liverpool developed rapidly.

Civic pride grew as the city prospered and as a consequence, a venue was needed to host impressive music festivals. In tandem, there was a pressing need for crown courts and civic courts of various sizes. The council decided to combine both projects and so the concept of St George’s Hall was born.

The Hall was the vision of Harvey Lonsdale Elmes, who although young, produced a magical concept to add spice to the design with the addition of the incredible 500 seat Concert room.

The Hall is a truly unique building in concept, design, and vision; the Victorians held nothing back in their ambition to create a work of art.

Elmes took inspiration from the Roman and Greek empires, creating a Neo Classical Greek-Romano building, now classed as one of the finest in the world. It is an intrinsic part of Liverpool’s UNESCO World Heritage Site.

The Hall has held thousands of events over the years, many of which are iconic, receiving international acclaim.  The Hall is also fortunate to have a world renowned Willis concert organ, with recitals still taking place to this day within this majestic space with its barrel vaulted ceiling and the peerless encaustic tiled Minton Floor.

The Hall is recognised as the emotional heart of the city; it is where all the memorable moments of the city’s life converge.

Famous visitors to the building include Queen Victoria in 1851 who said the building was ‘worthy of ancient Athens’, Charles Dickens who gave a number of public readings in the Concert Room and claimed it to be ‘the most perfect Hall in the world’ and Liverpool-born Prime Minister William Gladstone, who was awarded the Freedom of the City in the Hall in 1892.

In 1984, when the law courts of Liverpool were relocated to Derby Square, the Hall was ‘mothballed’ and fell into a state of disrepair. Following a £23m restoration project, completed in 2007, the Hall was reopened on St George’s Day that year by another of its admirers, Prince Charles, and has become a grand focal point for cultural, community, civic, corporate and performing arts activities once again.