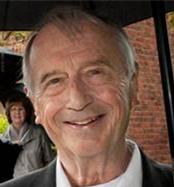 Rod is a professional architect, who received his architects’ license in 1969, whilst working with Arne Jacobsen in Copenhagen. Earlier he had worked with both the Libyan Government in Tripoli, and Hart Massey in Ottawa. His most prestigious projects with these other architects includes the Expo ‘67 railway stations in Montreal, the American Express Bank in Copenhagen and the Kuwait Central Bank in Kuwait City.

According to The Times newspaper in London, he was the first ‘Community Architect’ in the U.K. with his ‘pioneering architect’ (HRH, the Prince of Wales words) scheme at Black Road in Macclesfield. Since establishing his own architect’s office in 1971 he expanded to offices parts of England, Scotland, Ireland, United Arab Emirates and the United States. With Tia Kansara, he established the international design firm, Kansara Hackney Ltd in 2009, which concentrates on urbanism and architecture.

He is a past President of the International Union of Architects, (France), the Royal Institute of British Architects (London), and the Snowdonia National Park Society (Wales).  Rod, as well as designing hospices, offices and houses for the private sector, is employed on various initiatives internationally, as a facilitator/enabler in projects linking those in need, such as community groups, to those who provide, such as private financiers or governmental departments.

He is a regular contributor to radio and T.V. programmes and a keen debater, including a panelist on European talk shows such as Any Questions on BBC Radio; Question Time, BBC T.V; Oxford Union debater; Eton College debater. Rod has been featured in a number of Media documentaries on his work, such as the BBC Omnibus program and R.A.I, Italy, called the ‘The Hackney Way’.

He represented the United Nations on a number of occasions, including Nairobi Habitat initiatives, the best practices in Architecture in Dubai, and Shelter for the Elderly, New York. He is frequently invited to put the case for more community involvement in housing at a number of conferences and symposia including official visits sponsored by the British Council to Russia, India and Sri Lanka. Rod also communicates through theatre and music. The Musical Play, “Good Golly, Miss Molly” depicted his Hawes Street community architecture scheme in Stoke-on-Trent in England, ran in London’s West End, where it played to full houses between 1991 and 1992.

Rod is also an artist (painting and sculpture) and a writer. His autobiography, the Good, the Bad and the Ugly, reaching No.1 in one of Britain’s retail bookshops in 1989, will be re-issued by Routledge in 2014. He regularly chairs or partakes in international design competitions, and has working experience in the Far East, the Middle East, Europe and the America’s. His portrait, photographed in 2013, is exhibited at the Royal Institute of British Architects in London, where Rod serves as a ‘Senior Conservation Architect’ on one of the RIBA committees