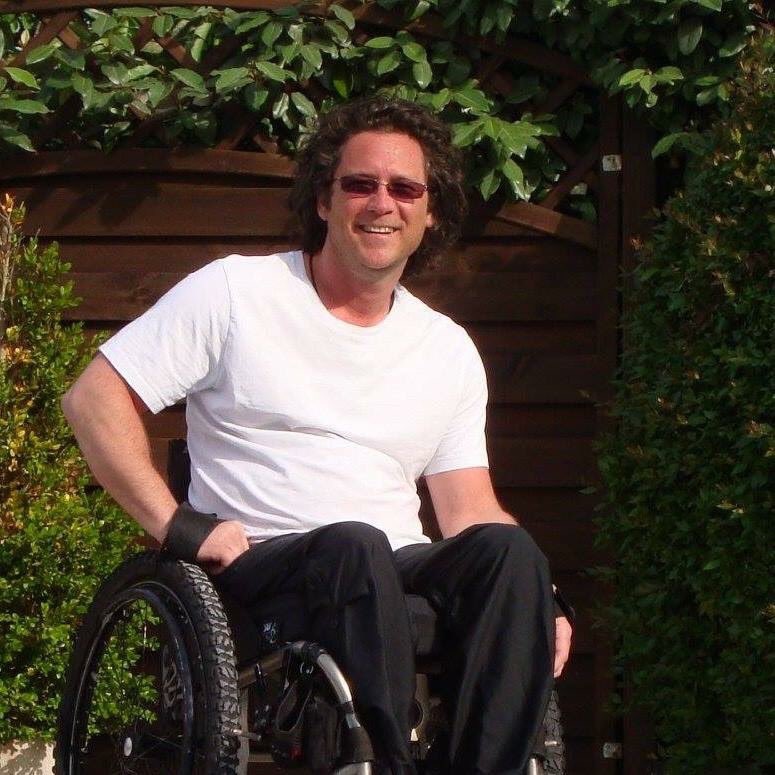 On a sunny morning, September 2003 my life took a dramatic change of direction, which would alter the way I lived from then on.

I was working in the music business as a manager of artists and songwriters, working with them on all aspects of their careers. A busy life but I really enjoyed it. Then my life changed… I had gone to Exeter with a couple of friends on a weekend motorbike trip and on the way back I had an accident I have no recollection of. Apparently, the bike skidded on some gravel on a sharp corner and I ended up in a farmer’s field, waking up two days later to find family and friends gathered around my hospital bed. I was pretty battered, high on morphine for the pain and through the haze of it all it, discovered that I had crushed my spine and I would never walk again.

It was a grueling few months with various operations and rehabilitation, but one thing stuck with me while in hospital - I have this vivid memory of a nurse coming and telling me that one-day I would realise I was one of the lucky ones! I wouldn’t understand what she meant until later on. I was discharged just before Christmas 2003 and started on the road back to independence. I had to master again the simplest of tasks that most people take for granted, I went back to work almost immediately, and it became clear quickly that my type of work was going to be quite challenging in a wheelchair. I had travelled with my artists taking them to shows and events as well as accompanying them to press and TV shows, but I soon realised it had actually become more difficult getting me in and out of a building than them!

In the following months as I started the journey of accepting the new normal in my life things took a turn again and I came down with the hospital superbug MRSA. In some ways I think this had more of a detrimental effect on me than the accident as I became very ill and eventually had to have all the reconstructive metalwork removed from my back. It was down to my friends and family getting me through this tough time. Everyone rallied and I worked hard at staying positive. During this time, I started asking more questions about disability, and without realising my research had started into something that was going to help reshape my life.

There are some fantastic organisations out there with some wonderful people helping the disabled community to help rebuild shattered lives, so I started to reach out to many of them.

My first experience was a multi-activity course in the Lake District.  I remember vividly the first morning sitting outside the B&B with about ten other wheelchair users when the organisers turned to the tallest mountain in view and said, “We’re going to climb that today!”  The feeling of sitting on top of that mountain and having the realisation that I could still achieve my dreams was a very powerful emotion. One that made me realise that I could still have a life.That was in 2005 and in 2006 I went skiing to Colorado with The Back Up Trust and six other wheelchair users. Returning from Colorado, this was when the first of my ideas for building a website for the disabled came about.

My first venture was a website called The Wheel Life, the first social network for wheelchair users.  This was before Facebook, and we connected chair users from all around the world and gave them a platform to express themselves on.  It also worked very well for me on a personal level by putting me in the centre of the disabled community. This meant that people, charities and organisations would contact me about events and ask me to help spread their message.

After engaging with professionals, organisations and other wheel chair users I soon realised though there just wasn’t enough information readily available to the disabled community. It has got better but you really have to research things, it certainly wasn’t easy. So after hearing one too many wheelchair users say “I wish I had known about that” I decided to start Disability Today primarily to help give everyone the opportunity to access the information they need but often miss out on.

Over the last few years I have been lucky enough to be involved in some incredible adventures.  From climbing Ben Nevis for Capability Scotland, pulling a jumbo jet along the runway with other wheelchair users to break a world record, to flying, gliding, micro-lighting, rally driving, quad biking, clay pigeon shooting, water skiing and even getting back on a motorcycle and racing round Castle Combe at over a 100 miles an hour!  I have also become a trustee of The White Lodge Centre, a charity that’s been going for 55 years, supporting children and adults with severe disabilities.

As well as the charitable side a few years ago I got involved with a research project looking at the advancement of exoskeletons for the paralysed, and I’m participating in an on going study in to the effects of osteoporosis and the drugs being developed to hold it back. I’m a test case but it seems to be working.  My scans reveal that after 13 years in a wheelchair, my bone density is still the same as an able bodied man my age.  This is obviously great news for me and others living with paralysis. It’s been a serious rollercoaster ride so far, with definitely some ups and downs but I really do know... “I am one of the lucky ones!"