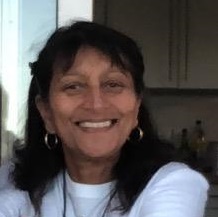 Fay Morgan Hine, MCIPR is a long time public relations consultant, project coordinator and administrator. She has worked in the fields of radio, theatre, television, fashion and retail, residential and commercial property and the professions, winning three peer awards for PR campaigns and a rarely given award, the Certificate of Merit, from the Manchester Publicity Association for services to their industry charity, NABS.

As owner/manager of a contemporary art studio and as a TEFL teacher (English as a foreign language), Fay was able, not only to indulge her love of art and music but also develop her work with children, young people and adults of varying abilities through in-school and NHS work, in art and drama. She says, "One of my favourite things was being able to ‘give them permission’ to choose and be themselves. It was tremendously satisfying”.

Fay was born in British Guiana (Guyana), grew up in London from the age of 5 and moved to Manchester in 1982. In 1987 she met and married Corporate Finance consultant John Armstrong LLB, and they have two grown up children of whom they are incredibly proud; a daughter with a Masters Degree in International Education, Globalisation and Sustainability, and a son with a degree in Event and Festival Management.

Following a separation, Fay met Rupert Hine in Los Angeles in 2008 and became involved in his management and admin when they returned to live permanently in the UK in 2010. She was integral in helping him and his business partner set up their tech company One-Click Licence Ltd (OCL) that developed Origen; the world’s the first micro-licensing technology.

She maintains her membership of the Chartered Institute of Public Relations and, when not working, she enjoys painting and playing golf; she’s been a presenter on local radio for over 15 years, volunteers at her local youth club and for the Songwriting Charity - of which Rupert was a Patron. She’s been called “a veritible, modern polymath”… though, when reminded, she’ll laugh and say: “About me, that just means Jill of all trades!"