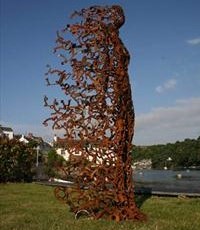 In celebration of International Women's Day 2020

Wings which embrace you from the first taken breath, creating a fortress of impenetrable protection around your soul

A heart which beats in unison from the first breath taken,

Creating a unique imprint, uniting forever an invisible bond, leaving at first their own, and later your joint presence upon the universe

A force the like of which will quell the fiercest storm with words unspoken, yet universally revered, drawing lines beyond which none dare to cross

A touch, as soft as the trail of the silken worm, yet when called upon commands a strength of the glistening spider's web to protect and cocoon you

A smile which falls upon your face, reminiscent of the first ray of sunlight breaking through the tallest trees as it falls gently all around you dancing alongside your emotive states

Tears that fall freely at the injustice in the world, create rivers of change, innovation, integrity and purpose alongside laughter which melts the iciest of hearts

A scholar who knowingly brings forth lessons which will fall mostly beside you, only revealing their magical intent long after your travelled path is broken by the cruelest fated twist of the breath last taken

Threads of courage, integrity and purpose become entwined within the very essence of your being, alongside the conviction of your own presence and powerful impact in the precious life you have been given

Selflessness, matched only by the Casseopian roar liken to a veil of mist, creates unimaginable heartache as crimson as the most beautiful lotus flower, as its petals float gently to the ground amidst decisions taken which cause ripples in time itself

Rising against all forms of Misogyny and patriarchy with a resounding 'Go on, then underestimate me!'

Shunning the expectations of centuries gone by, preferring to set paths anew as you shine brightly in your own constellation

Most resplendent as wings first designed to cocoon you, carry you to the inevitability of a path you will travel,

Calling upon, at a moment, the essence of all Women which is carried within you

Collectively, the next phase of humanity rises, no longer expending energy on trappings of the past but creating a new blueprint, a way of being, of governing, of life

Footsteps now resting within your soul rise to spend a while beside you, as the familiar and longed for touch, scent and spoken words wash over you, as on this of all days we celebrate generations of women past, present and future.